The “Espace Éducatif Saint-Louis”, Banankoro, which is already known for its many activities with and for women, has just opened a school. On October 17, 2020, Monsignor Zerbo accepted with great joy the invitation from the Sisters of Charity of St. Louis in Mali to bless the new school. For the current year, the Kindergarten (medium and large sections) as well as the first and second years of the primary school opened their doors… Then, year after year, the school will grow bigger…

When Fr. André Sylvestre, the founder of the Society of Our Lady of Perpetual Help, Tozia, asked the Sisters of Charity of St. Louis in Haiti to take up responsibility for a mixed orphanage of 36 children, they said: “YES”. It meant teaching from preschool to secondary 1 and running a dispensary and a farm. Thus, a community of four sisters who have engraved on their hearts a quote from Mt 19: 14: "Let the children come to me" was established. God bless this new venture!

The Sisters of Our Lady of Compassion were founded in 1824 in Argenteuil by Mother Marie-de-la-Compassion who established the Mother House at St. Denis in 1829 where she opened a day and boarding school. In 1967, her Congregation merged with the Sisters of Charity of St. Louis founded in Vannes by Blessed Louise-Elisabeth. 191 years later, the Sisters left St. Denis, knowing that a healthy tree continues to bear fruit when its seeds are planted in love and tenderness. 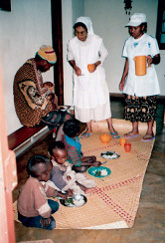 “To be a compact, there must be at least two persons”, the Pope said.  The General Superior, Sister Alberte Piché wanted to attend the Webinar; she asked SCSL active members to join her on this virtual venture from November 12-14. There were 8 of them: 1 Canadian, 3 Haitians, 2 Malagasy, 1 Malian and 1 Senegalese. It is a key moment for SCSL’s whose “mission involves works in education and in human development in the social and spiritual spheres”.

Now, those Sisters are ambassadors who they told us what animates them: “The dignity of human beings is at the heart of my vision. I want to respect diversity”. “I want to make the youth aware of the importance of relationships, to help them appreciate the elderly…” “I want to show that life has meaning only when given to others”. “I want to enhance respect for differences, acceptance of one’s own culture and appreciation of differences in others, to encourage them to see others as companions on their journey and not as threats".

"Never before has there been such need to unite our efforts in a broad educational alliance”, the Pope said as he launched The Compact on October 15th. “To educate is always an act of hope”, he said.

To know more about an exceptional woman

From Louise-Élisabeth to Mother Saint-Louis: in this brochure you can follow her human and spiritual itinerary as well as her quest for life fulfilment and realise that even today, her life has much relevance…